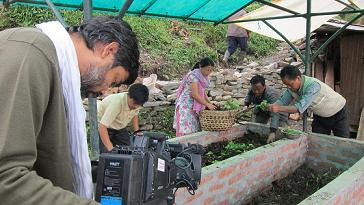 GANGTOK, June 24: Millions of Indian viewers were introduced to the Organic Mission of Sikkim on Sunday when the State government’s efforts to pioneer organic farming in the country was telecasted on ‘Satyamev Jayate’, a popular talk show hosted by Aamir Khan.
‘Satyamev Jayate’ focuses on neglected issues of the country like health and child abuse and today’s edition was on harmful effects of using pesticides and fertilizers by the Indian farmers.
Aamir urged the audience to go for organic products and highlighted on national television about the Organic Mission of Sikkim. The mission, on making Sikkim a fully Organic State by 2015, was well appreciated.
Aamir also spoke with Chief Minister Pawan Chamling during the show through 3-G link.
The Chief Minister briefly explained the host and audience that use of pesticides and fertilizers have been banned in Sikkim. We are promoting organic farming and our vision is to make Sikkim an Organic State by 2015, he said.
“It is not possible for all the States to switch to organic farming overnight, but taking some steps to save people’s life is essential now” said Chamling during the show.
State Agriculture minister DN Tarkapa also explained the benefits of organic farming during the show.
The mission, started from 2010 at the ground levels, has seen 8,168 hectares of cultivable land certified as organic by the accredited institutions. The total cultivatable land in Sikkim is 58,168 hectares.
The brief presentation about the mission on ‘Satyamev Jayate’ started with an audio-visual introduction of Sikkim by Aamir as a State which has set an example through organic farming. Footage of Temi Tea Garden, Kanchenjunga Shopping Complex, Rumtek and progressive farmers holding the banner of ‘Welcome to the Organic State’ was screened during a one-minute snippet.
“I was thrilled to watch Sikkim on a show which the whole nation is talking about. I never thought the impact would be so good”, said Rashmi Gurung from Deorali.
Agriculture secretary Vishal Chauhan told media that a team of ‘Satyamev Jayate’ had visited Sikkim a month back and done an extensive research on organic farming. They also referred the records and data provided by the department and today’s show was a proud moment for Sikkim, he said.

Posted by Slogan Writing Competition at 08:48